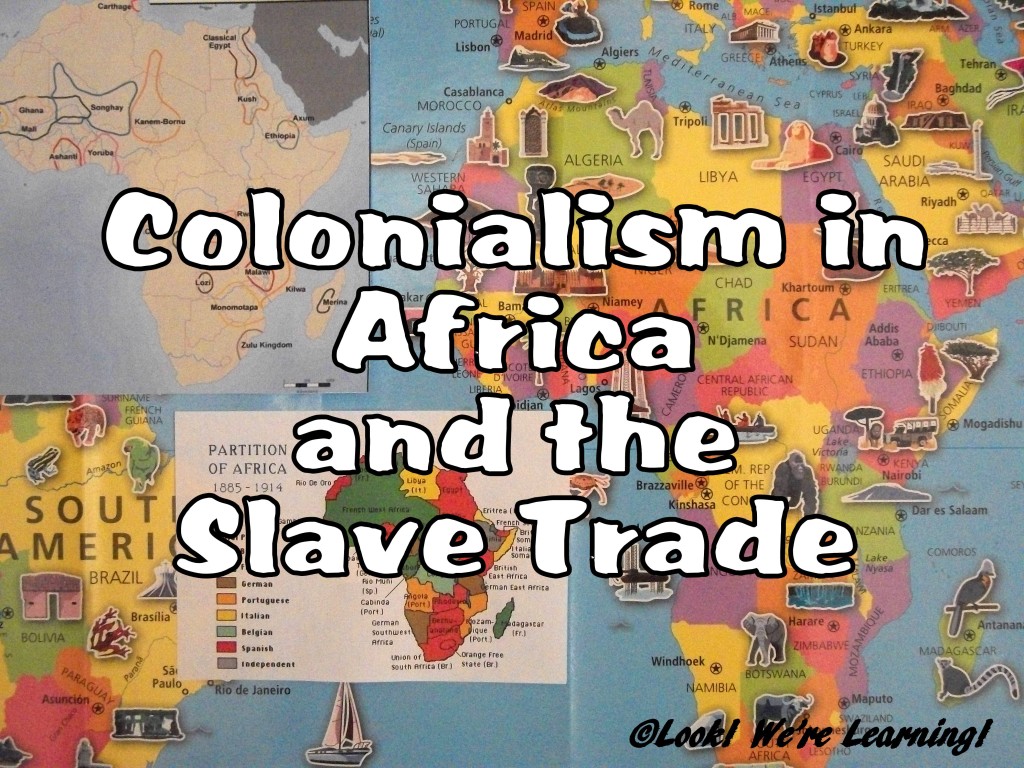 Hi everyone! We’re coming to the end of our African History series and, as sad as it may be, no history of Africa is complete without a discussion of colonization and the Trans-Atlantic slave trade. Jay and I don’t agree with the idea of avoiding this subject with our kids simply because they are young. We’re careful about the extent to which we cover the topic, but we do talk about it with them. As they get older, we’ll decide when and how to explore this matter further.

The Scramble for Africa

If you’ve been following our series, you may have noticed that we’ve been marking the locations of the original African kingdoms on a map of the continent. We used this map from Exploring Africa as the basis for the activity:

As you can see from the map, Africa was sparsely populated as a whole. There were clusters where certain kingdoms and tribes resided, but much of the continent was empty (mostly because of lack of water). Despite Africa’s modern unrest, the ancient continent was fairly peaceful and united. Rival kingdoms engaged in warfare, but there were no ongoing civil wars or long-lasting periods of unrest.

The European colonization of Africa drastically altered this landscape. From 1881 to 1914, several European nations engaged in what has been called “The Scramble for Africa”. During this period, 90 percent of the continent came under European control. Contrast the map above with the redrawn map of Africa in 1914: What’s really infuriating about the Scramble for Africa is that it began after the European countries met and signed the Berlin Treaty of 1884. This treaty was established at a summit to which NO AFRICAN LEADERS WERE INVITED. The governments of these countries literally got together and carved up the continent like a pie without even telling the people who lived there that it was happening. I don’t care how long ago that was. It was an unconscionable act.

We printed out a sketch version of the colonization map and had the kids color it in. 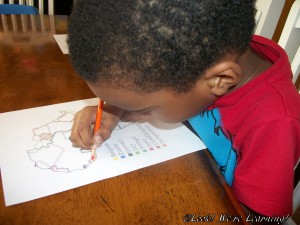 Since the lines were fairly complex, I outlined them in advance to give them a guide to follow. 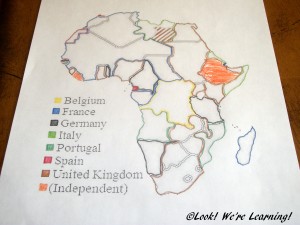 The kids were amazed at how much of Africa went to France and the U.K. Interestingly, both Liberia and Ethiopia remained independent of European control during these years. 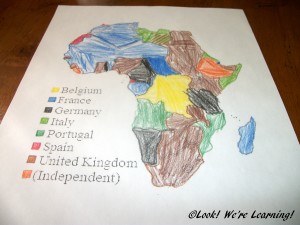 The Trans-Atlantic Slave Trade got started during the 1400s when Portuguese traders began buying Africans from some of the tribal rulers. They needed cheap labor to help develop their colony in South America (which became Brazil) and African slaves were especially good workers. Over time, this ballooned into the worst part of what Africans refer to as the maafa, meaning “great and terrible tragedy”.

During the years 1450 to 1850, an estimated 10 to 15 MILLION Africans were sold into European and American slavery. That is a mind-boggling number, especially when you consider the logistics of overseas communication and transportation in those days. Eventually, the traders grew tired of paying for slaves and simply resorted to overpowering them and kidnapping them. In some cases, entire tribal villages were impressed into slavery.

Many African rulers who sold slaves to the Europeans imagined that they would be treated humanely. This proved not to be the case. Slaves were literally treated as cargo and were crammed onto and under shelves that were as low as 18 inches high, nearly on top of one another. Those who died or became sick along the way were thrown overboard.

We showed the children a slave ship diagram to help them imagine what it must have been like to cross the Middle Passage aboard a slave ship:

A few weeks back, we visited the African Panoramic Experience (APEX) Museum as a family to learn more about the lives of enslaved people in America. After being marched to the western coast of Africa, slaves passed through the “Door of No Return” into the holds of the ships. 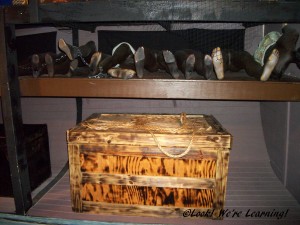 Those that made it through the Middle Passage were immediately sold. If they were fortunate enough to arrive in America as families, they were quickly separated and sold to different owners. 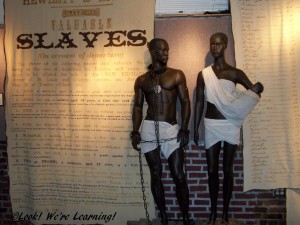 Our kids were frightened to learn that babies and children were routinely sold away from their parents. The tour guide explained that this was done so that children would forget their parents and become attached to their owners, making them less likely to run away.

A reproduction of a slave auction advertisement 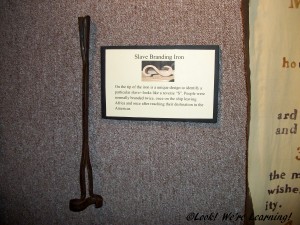 Slaves were literally branded with cattle irons. This was typically done when they were first captured and then again after their arrival in America. Horrible. 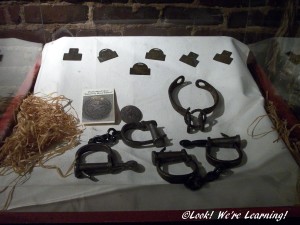 These are some of the actual slave chains used to shackle small children. I teared up staring at these. The thought of someone taking my children away and treating them like this is unfathomable.

Visiting the APEX Museum was a difficult experience, but I’m glad we went. The museum also focuses on the incredible accomplishments of African Americans through the years. We’ll be sharing our complete field trip to the museum on the blog in a few weeks.

Africa for Kids: African Slave Trade – Kid-friendly summary of the slave trade and the extent of its operation

Wikipedia: Maafa – A thorough definition of the African term “maafa” and all of the events that played a role in it, including colonization and European/American slavery

The Colonial Conquest of Africa by Robin McKown

Daily Life in Ancient and Modern Cairo (Cities Through Time)

Tomorrow we’ll finish up our 10 Days of African History for Kids series with a look at South Africa and apartheid. We’d love to “see” you there!