If I was to sum up the last ten years of my life as a parent in one word, it would probably be “homeschooling“. We planned to homeschool Tigger as soon as we found out we were pregnant and we’ve stuck with it from the very beginning.

Last month, we decided to put our three oldest kids in public school. Everybody gasp with me! GASP.

Like a lot of homeschooling mothers, I’ve thought about public school a few times before but this is the first time I’ve actually gone through with enrolling them. And it was hard. A lot harder than I thought it would be.

Still, I know it was the right decision for our family. For now. Here’s why I decided to take a homeschooling break. 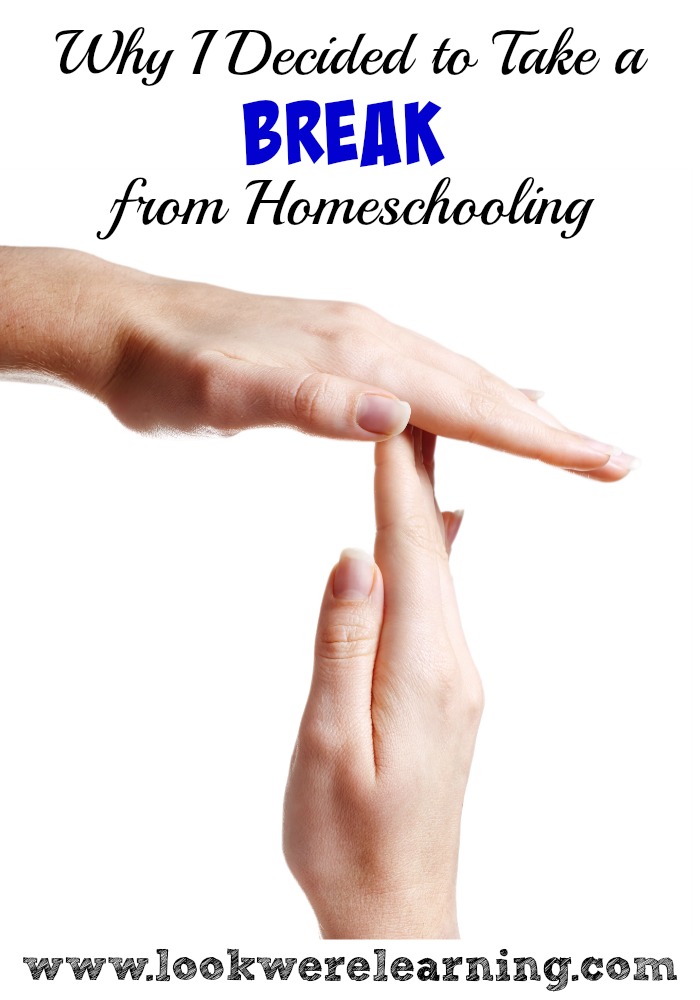 Why I Decided to Take a Homeschooling Break

1. I was no longer a happy homeschooling mom.

For the past year and a half, I’ve been juggling homeschooling, working, and going to college full-time. During my first two semesters, my husband was unemployed, which was a huge reason why I went back to school in the first place.

This fall semester (ending this week! Yay!) has been the first time I’ve tried to juggle all three while he’s had a job. It. Has. Not. Been. Fun. I’ve been stressed for the last 15 weeks straight. I couldn’t even concentrate on teaching school to my kids, because I was so worried about my own (often rushed at the last-minute) assignments.

2. My ADHD was becoming a real problem.

I’ve always had a lot of things going at one time. I was brought up that way and I’d done it so long that I didn’t know there was another way to live. Since I have ADHD, I tend to get bored quickly and want to move on to something else.

Here’s the problem: You cannot do that when you have to take care of a home and raise children with consistent values. Boredom is not an excuse to skip lessons for a week (or a month), let dishes pile up in the sink, or overlook a tantrum. I had gotten to the point where it was either: A) put my kids in public school so I’d have a little time to clear my head or B) try medication. And, for me, medication is the absolute final last resort.

3. I didn’t want my kids to get the wrong idea of motherhood.

Most importantly, though, I began to feel that I was giving my kids the wrong perception of motherhood. Moms shouldn’t be stressed out and frazzled, because they have too much going on at once. And we certainly shouldn’t treat our kids as if they’re inconveniences, which is what was happening to me. I mean, what’s the point of keeping them home with me if I’m biting their heads off every time they ask a question?

Here is an example of an actual exchange between me and Pooh:

Pooh: *loudly from down the hall* “Mama?”

(I’ve since apologized. Fortunately, he’d forgotten about it. But it was not one of my proudest moments as a parent.)

That is not the mother I want to be. And I decided that being a happy mom was more important than being a homeschooling mom. Right now, I can be one or the other but not both. And my husband, wonderful supportive spouse that he is, was open to it from the beginning.

Btw, I’ll be blogging about our transition and some of the adjustments we’ve had to make along the way. And I’ll keep sharing great educational unit studies, lesson plans, printables, and more! I have Piglet with me during the day and she’ll be starting tot school soon, so I’ll have plenty to share for preschoolers in the upcoming months. Plus, I’ll be making activities and lessons to use with the kids during breaks and summer vacation. So if you’re a fan of our resources, they’re not going anywhere. 🙂