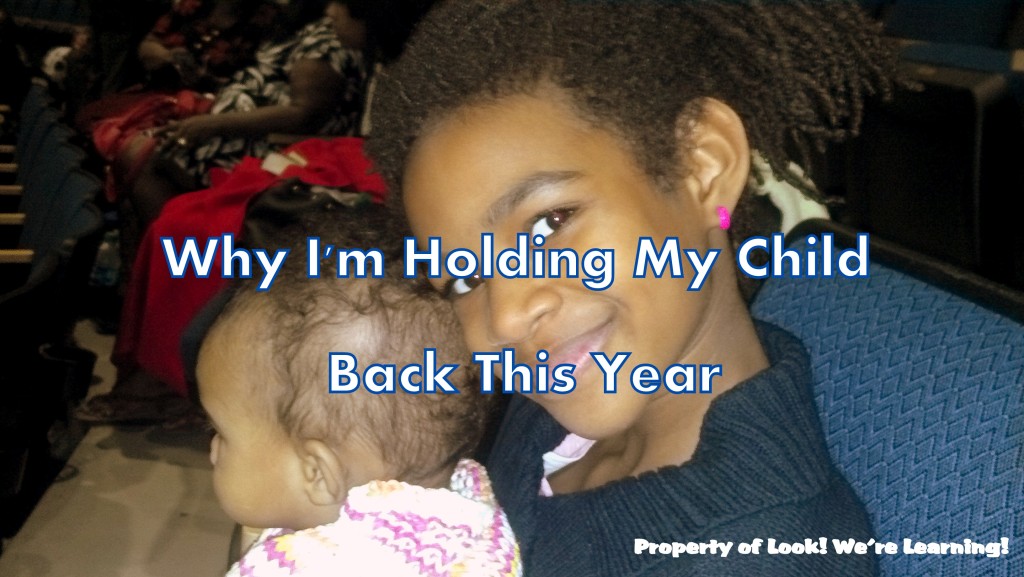 Yep, I said it. I’m holding my child back a grade this year. And I don’t feel bad in the least for doing it. The interesting thing is – I’m not required to do this. She didn’t fail a test that resulted in her having to repeat a grade. She’s not exceptionally behind on anything. In fact, she’s probably ahead on several subjects, especially reading and language. So, why am I choosing to repeat a grade with her?

It’s mostly because of me. Last year was a very trying one in our homeschool. My husband’s employer suddenly became extremely demanding, requiring him to work 12-hour swing shifts five or six days a week. For about three or four months straight, he actually worked more than 70 hours weekly. To make things more difficult, I was also working full-time from home. To complicate matters further, we found out we were pregnant with Piglet, who was a wonderful gift but also a completely unexpected one.

As a result, I wasn’t as prepared for the school year as I would liked to have been. Third grade is a pretty important year for kids. It’s a marked transition from the seatwork of early grades to the critical thinking requirements of upper elementary grades. I don’t feel that Tigger is as prepared as she could be to move on beyond that and I have no desire to thrust her into that situation simply to follow a certain timeline. On this matter, I’m speaking from personal experience.

When I was 11, my mom decided that it would probably be best for me to be homeschooled. I liked elementary school, but I was excited about the opportunity to learn at home on my own schedule so I was looking forward to it. I took the placement test for Calvert School and the teachers suggested that I skip sixth grade and possibly even seventh, because it appeared that I was advanced enough to do so. My mom agreed but decided that I should go ahead and take seventh grade.

That’s when I found out that a lot of important math and English skills are taught in sixth grade.  I know this because when the curriculum asked me to complete a basic pre-algebra equation or to diagram a sentence, I had no idea what those concepts meant. I struggled through seventh grade and eventually finished it, but it took me two years, completely erasing any “gains” I had made by skipping sixth grade.

The good thing for Tigger is that we started her in school a year early. Based on her birthday, she would just now be going into third grade in public school as well, so she’s technically not going to be “behind.” The truth is, though, I wouldn’t mind if she was. My concern is making sure my child is prepared for what is expected of her, not turning her into a case study for gifted homeschoolers.

Have you ever thought about having your child repeat a grade? Do you even bother teaching by grades at all? I’ve love to hear what you think in the comments. Keep on learning!