I didn’t learn about Shakespeare at all during grade school, so it wasn’t until I got to college that I got a chance to read and watch classic Shakespearean plays. And, to be honest, it was confusing. I watched a live rendition of Twelfth Night for English lit class and I think I went to sleep during Act II.

As I’ve gotten older, though, I’ve started to appreciate the wit, vocabulary, and poetry of Shakespeare’s writing. It’s almost as if each line is intentionally written to stand alone as a quote. Rereading his works as an English major when I returned to college a few years ago left me in awe at how poignantly he could describe the most ordinary things.

So I decided to introduce Shakespeare to my children as soon as possible. But my two boys are not the voracious readers that my girls are, which means I had my work cut out for me.

And that’s why I was excited to review the book How to Teach Your Children Shakespeare with the kids! With the quotes and ideas from the book, we were able to make Shakespeare fun for kids, even my reluctant readers!

Read on to see how we did it. And find out how you can win a FREE copy of the book for your family!

Disclosure: I received this product in exchange for this post and I was compensated for my time. All opinions are my own and I was not required to write a positive review. (Affiliate links provided here for convenience. For more, see our Disclosure Policy.) 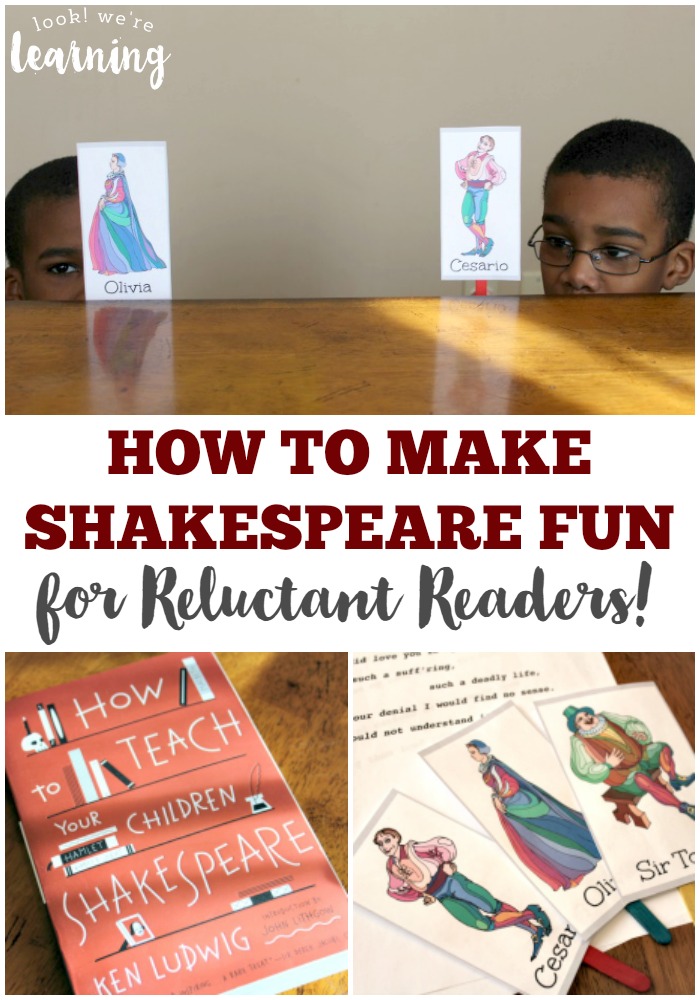 How to Make Shakespeare Fun for Kids

I started by reading the book How to Teach Your Children Shakespeare by Ken Ludwig. It is truly packed with ideas and suggestions for how parents can bring these works to life, even for kids who are very young or unenthusiastic about learning poetry. 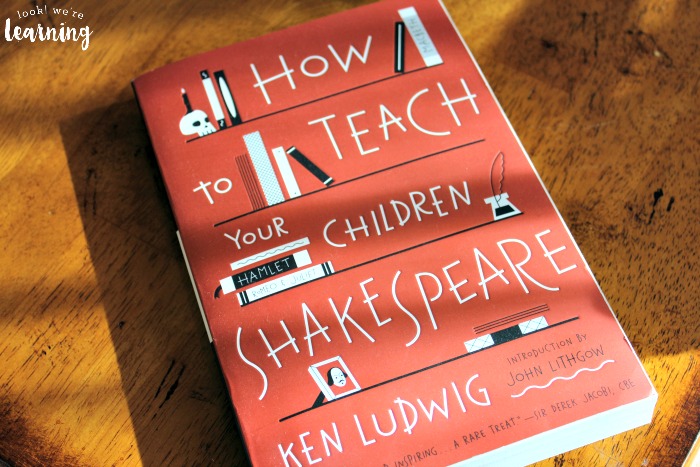 Personally, I had made a list of reasons why I thought I had to wait until my kids were older to teach them about the Bard, including the following: 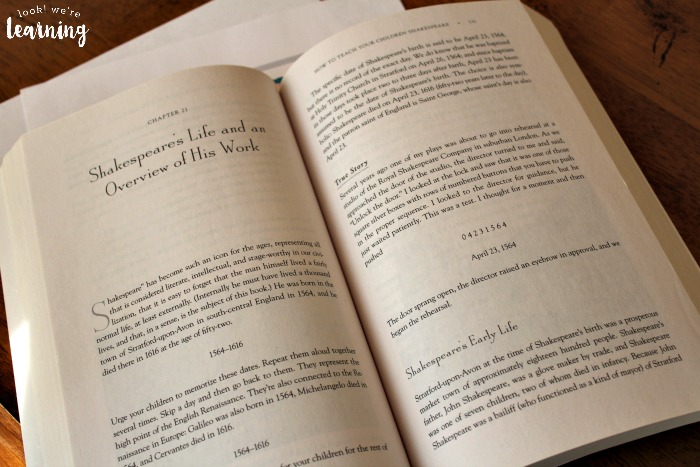 And this is why How to Teach Your Children Shakespeare is so awesome. The author, Ken Ludwig, doesn’t shy away from any of these potential challenges. In fact, he addresses them head on.

Yes, your kids will have difficulty understanding the plays.

Yes, your kids will get frustrated at trying to memorize the lines.

Yes, your kids will get bored if they try to read the plays as they are written.

But there are ways to help them get past these obstacles and truly love these plays if we try the suggestions offered. I greatly appreciated the candor of Ludwig’s writing and that made me more receptive to trying his ideas. By the way, those ideas really work.

In the book, Ken recommends starting children off with memorizing a short passage from A Midsummer Night’s Dream. He emphasizes going line by line and looking up any words that are unfamiliar.

Since Elizabethan English is quite different from modern English and since Shakespeare’s plays are a bit on the long side, that’s going to take some time. But that’s okay! We have time to sink our teeth in and savor these plays with the kids. There’s no hurry whatsoever.

Since I’d already seen Twelfth Night as a teenager (but couldn’t remember it due to falling asleep), we started working with that play.

On the How to Teach Your Children Shakespeare website, you can print off passages from the plays mentioned in the book and use them to help the kids work on memorizing short lines. We grabbed a few scenes from Twelfth Night and got started. 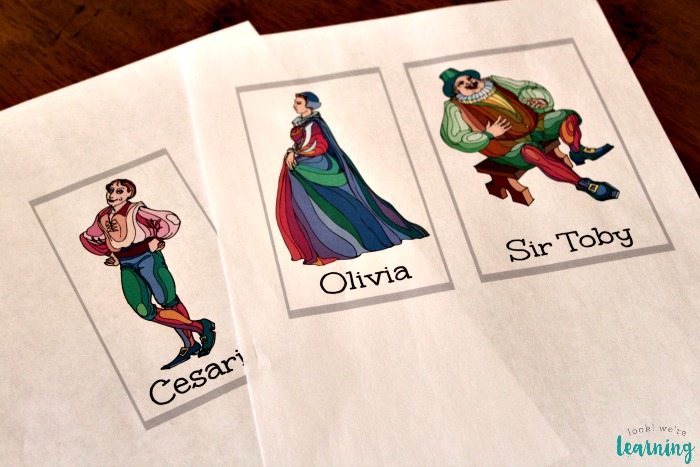 My boys weren’t too enthused about reading the lines at first, so we made some printable stick puppets from some of the principal characters in Twelfth Night.

Then we just cut them out, stuck them on some colored craft sticks, and made character puppets to act out the scenes!

Once my boys saw the character puppets, they wanted to jump right into playing with them. But they’re not just toys – they’re characters who have specific things to say to one another. Which means they had to learn their lines. Once the ground rules were established, they were ready to work on practicing the dialogue. 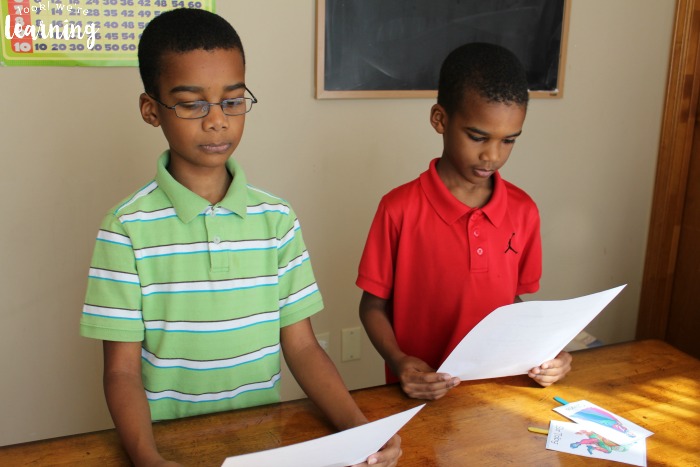 Interestingly, one of the attributes Ken encourages parents to stress is the way Shakespeare adds twists and turns to his plays so that the audience is surprised by how each story unfolds. When I assigned the Twelfth Night characters to the boys, I told my youngest that he’d be playing Olivia and my oldest that he’d be playing Cesario. The oldest taunted my younger son, crowing “Ha, ha! You have to be the girl!” 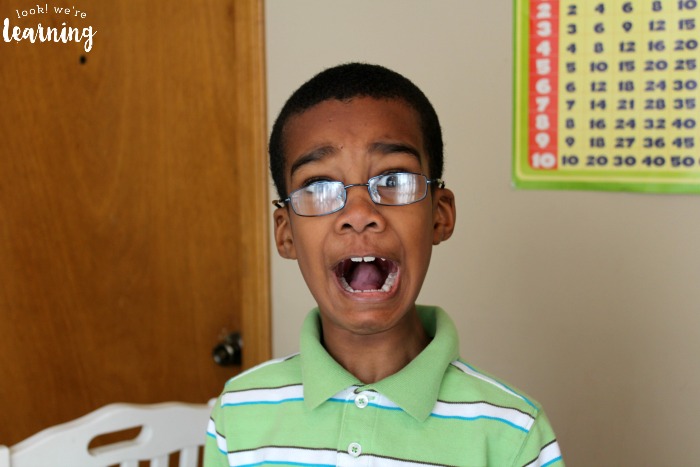 When he found out that Cesario is actually a woman named Viola disguised as a man, he was aghast. Serves him right. 🙂 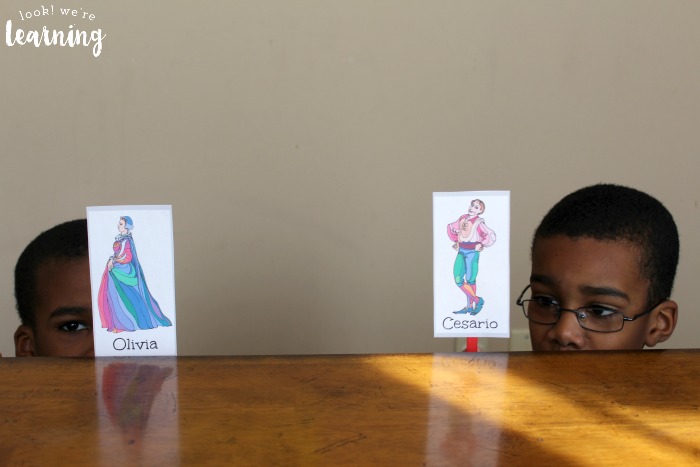 After spending some time practicing their lines, they were ready to do a few passages from Act 1, Scene 5 of Twelfth Night.

Here’s their rendition. I couldn’t get my youngest to deliver the lines with Olivia’s quiet admiration of Cesario, but he is seven, after all.

My oldest also got to play the role of Sir Toby in Act 2, Scene 3.

When he saw the line “Ye lie”, he was determined to say it like a pirate. Oh well.

To help them see how the play ultimately turned out, we watched this really good summary of the play. And as we watched, we checked off a few common playwriting devices Shakespeare uses in his comedies. 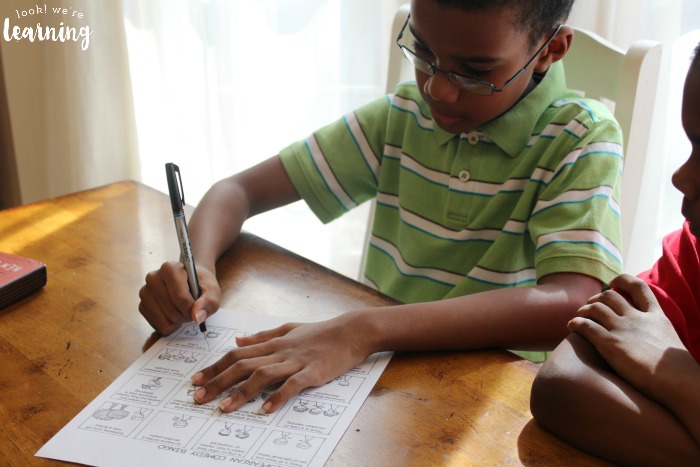 We printed off this adorable Shakespearean Comedy Bingo sheet from Good Tickle Brain and crossed off each plot device as it happened in the play. 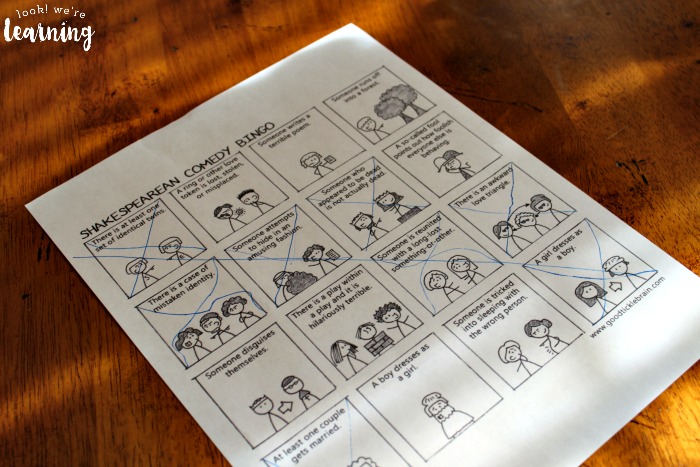 This was such a fun unit that I had to tell the kids it was time for lunch. That’s a record. 🙂

If you’re interested in learning how to make Shakespeare fun for kids, I cannot recommend How to Teach Your Children Shakespeare enough. It’s full of wonderful resources for developing a love for classic literature in your kids!

Oh – and if you’re interested, you can grab our free printable Twelfth Night Stick Puppet Figures set below! They’re awesome for using with the printable passages from How to Teach Your Children Shakespeare!

Don’t forget to enter for a chance to win one of TEN copies of the book! To enter, use the Giveaway Tools widget below! 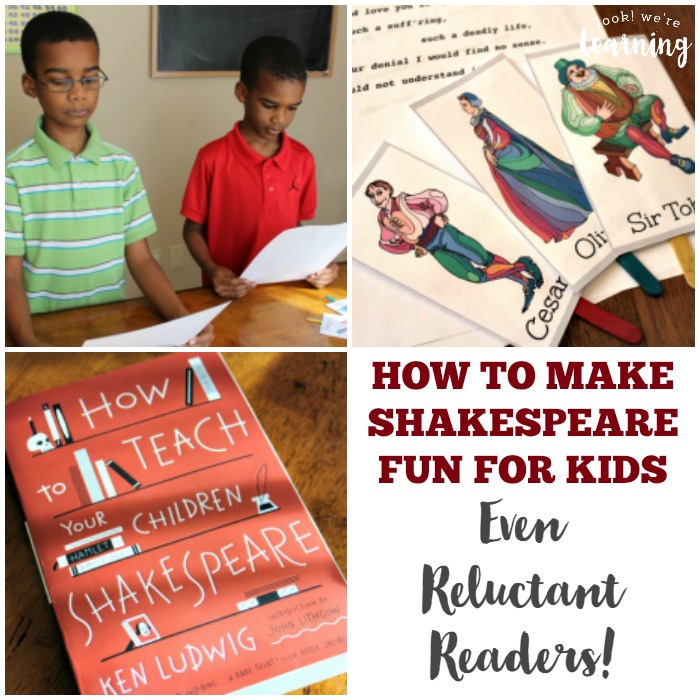 To learn more about the book and to connect with Ken Ludwig, follow him on social media!

And be sure to follow my Reading for Kids Pinterest board for more tips to help kids learn to love reading!