This post contains affiliate links, which help to support this site. Thank you!

Good morning everyone! Hope your week is going well! We’re having a blast over here! (Because we just studied volcanoes – get it?)

Last month we decided to set aside a day to learn about Mount Vesuvius, which erupted in August of 79 C.E. We figured that was a great time to talk about volcanoes in general, which Roo has been wanted to learn about for the longest.

First, we did some research about volcanoes themselves – what they are, how they work. There is a great basic post about volcanoes (complete with facts at animations) at Weather Wiz Kids. We read through that together and talked about the types of volcanoes and the basic idea behind plate tectonics. The kids thought it was cool that enormous pieces of land are constantly moving around the earth.

We picked up the Knowledge Box Central Volcano Lapbook from Currclick and reviewed basic volcano vocabulary and the types of volcanic eruptions, including Strombolian and Plinian. Which brings us back to Mount Vesuvius, because we learned that Vesuvius was a Plinian eruption (the most explosive) and that it got its name from the eyewitness account recorded by Pliny the Younger. Very neat.

To show the children just how large the Vesuvius eruption was, we looked at some images taken of the area.

What’s really fascinating about this image is that the top of the volcano is missing because it was COMPLETELY BLOWN OFF during the eruption. Wow. Geology.com has a great in-depth article about the Vesuvius eruption, with maps, pictures, and a history of both the 79 C.E. eruption that destroyed Pompeii and the smaller one in 1944.

(By the way, if you want to see some truly stunning, unforgettable images of volcanic eruptions, you have to check out this photoessay at the Daily Mail. Yes, it’s the Daily Mail, so be careful of the sidebars. But the images are worth a look.)

To get a real-time look at volcanoes, we watched a short video from National Geographic called “Volcano 101”.

Prior to watching this, I had no idea that volcanoes had any beneficial effects outside of forming land. Huh.

Of course, we couldn’t let this unit go by without making our own volcano. (I never got to make one of these in science class, so there was a little of living vicariously through the kids here. I can admit that.) We used the volcano recipe from Science Bob and a play dough recipe originally developed by Mister Rogers to form our volcano. 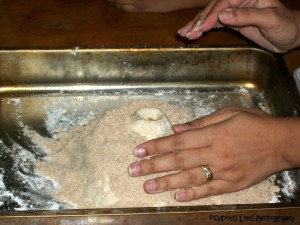 We mixed the flour and water together for the play dough and then made a hole in the center. We placed an empty prescription medicine bottle in the middle to hold our ingredients. To give it a slightly more authentic look, we added some of our play beach sand around the outside of the play dough. 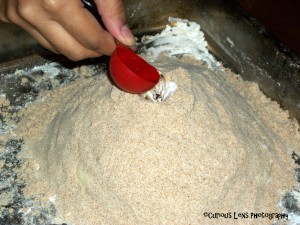 Time for the ingredients! It’s just baking soda, liquid dish detergent, food coloring, and vinegar. Save the vinegar for last, because as soon as you pour it in…. 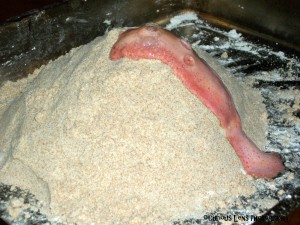 You get an explosion!

We had so much fun learning about volcanoes together! Have you gotten to discuss volcanoes yet with your kids? How did you go about covering this topic? Let us know in the comments!