In our family, we don’t celebrate Black History Month. After all, we’re not just black in February. 🙂 Since black history is important, we talk about it year-round. But I wanted to share one of our recent homeschool unit studies with you all now, while more people are thinking about black history.

The book The Story of Ruby Bridges was on our first grade reading list for this year, so when we read the book we made it into a full Ruby Bridges Unit Study! Read on to see the resources we used and the lessons we learned! 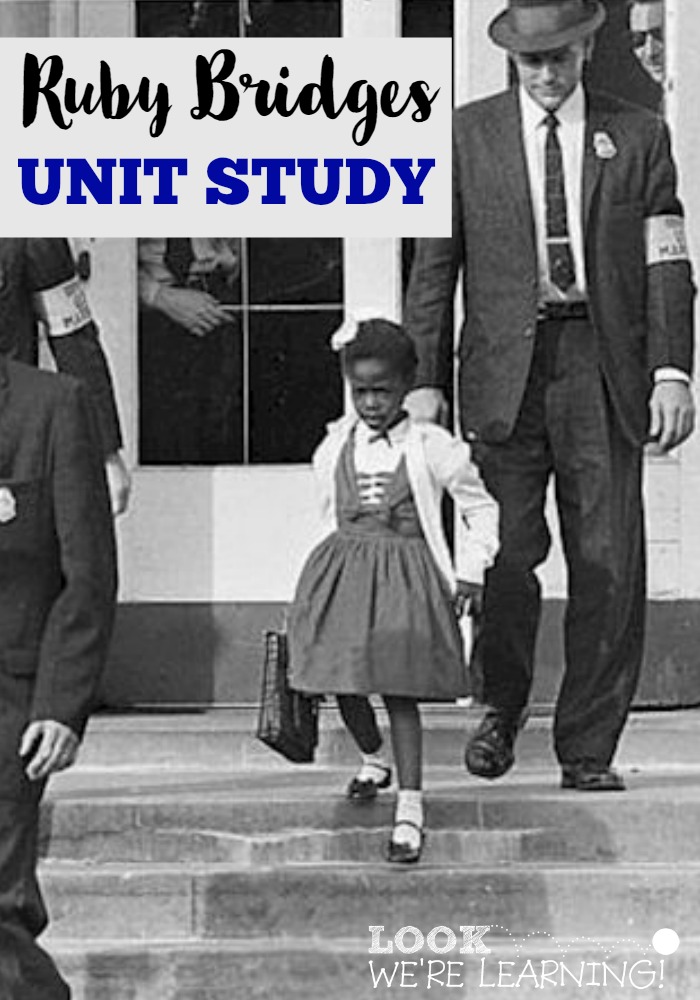 We began our unit by reading this book: The Story of Ruby Bridges. After reading it, we looked up more about Ruby’s life.

The Story of Ruby Bridges by Robert Coles

It’s amazing to think that this happened only about 50 years ago – long after slavery had ended. It just says something about how deeply ingrained certain ways of thinking can become.

I was really moved to see pictures of this little six-year-old girl walking through protesters into an empty school. The same people who took their children out of the school dedicated themselves to standing outside of it for weeks on end, shouting racial slurs at a child.

In fact, the president had to call in the federal marshals to keep Ruby safe from the mobs outside because the local and state police refused to help. You can see one of them in the picture above standing inside the building and smiling. Unbelievable.

We examined this excellent resource at Scholastic featuring a slideshow about segregation during the 1950s and 1960s. Since that was a generation ago, it’s one thing for kids to hear about it, but another thing entirely to see it. My kids couldn’t get over the white and “colored” water fountains.

This video is from the PBS series “The African-Americans: Many Rivers to Cross”. Seeing the footage of people screaming at Ruby really affected the kids. Honestly, it affected me too. I knew about Ruby’s story as a child, but seeing it now as a parent had a completely different effect on me.

I have to take my hat off to Ruby’s parents, because there’s no way I could send my child into an environment like that. But, as I told our kids, someone had to be first. And because Ruby went through that then, my kids didn’t have to deal with those kinds of pressures when they went to school.

I asked the kids to contrast Ruby’s first day of school with their first day of public school last year and write down the differences. Here’s what they wrote:

Seven-year-old Pooh: “When Ruby was at school, people hated her. When I went to school, everyone was kind. That must have been hard, scary for her but she did it!” 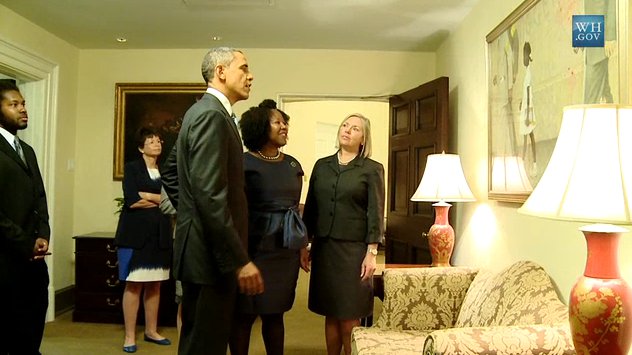 A while back, Ruby was invited to the White House where she and President Obama looked at the 1964 Norman Rockwell painting she inspired. In 2011, the painting was displayed outside of the Oval Office for a time.

Ruby Bridges got the chance to reunite with one of the federal marshals who escorted her to school back in 2013. You might want to check out this article about it, but *fair warning* you might also want to have some tissues handy. 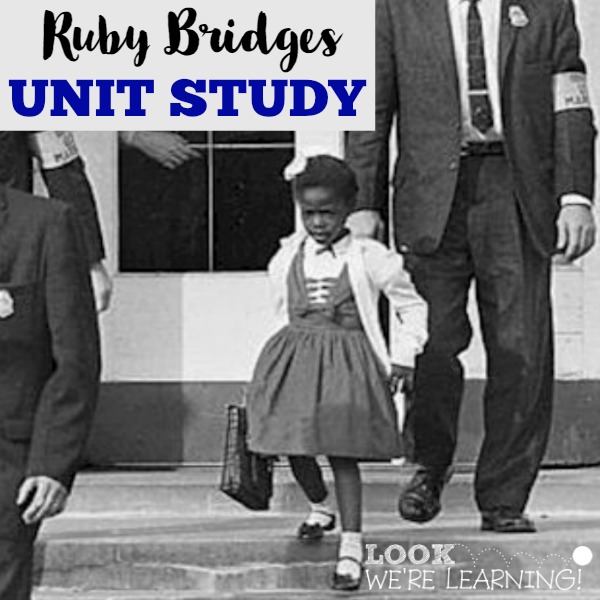 We used these links to learn more about Ruby’s life and experience in school.

Along with The Story of Ruby Bridges

, there are some other great kids’ books about Ruby’s life.