I cannot tell you how much my boys love learning about animals. They get so excited when they get a chance to see animals up close or even just to read about them. A lot of it has to do with their fascination with the Wild Kratts, which is just fine with me!

In particular, my sons love studying animal predators. As typical boys, they love learning about big, strong animals that eat other animals. So I was psyched to get to try the Scanorama series from Silver Dolphin Books! One of the books is called Deadly Predators, which I just knew would be a huge hit with my kids. And they ended up loving it even more than I thought!

See why the Scanorama series is so popular with kids (even kids who don’t love to read) and enter to win one of your own below! 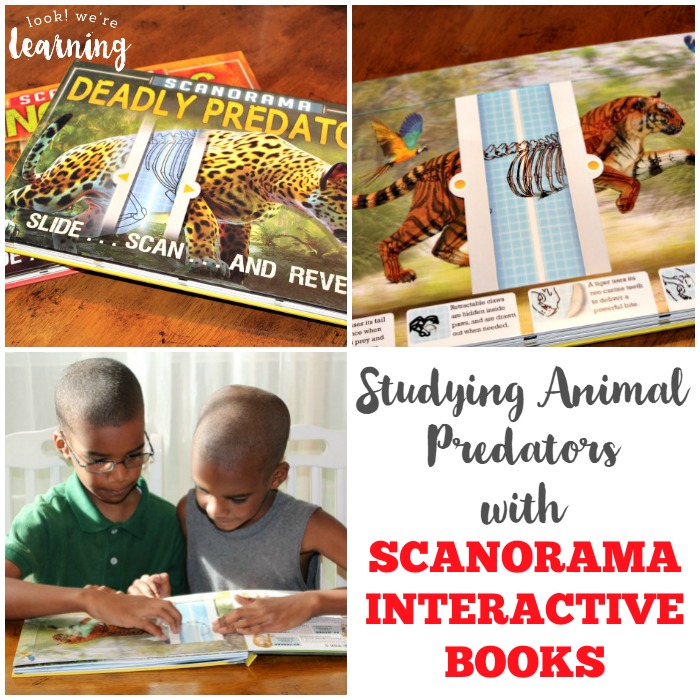 If you’re kind of puzzled about the name “Scanorama”, I get it. At first, I wondered what it was all about too. Here’s the simple explanation:

Titles in the Scanorama series let kids scan over images of animals and get an X-ray view of their skeletons. Did I mention I have typical boys? They were truly wowed by that feature, as you’ll see later on.

Oh – and see that book about dinosaurs peeking out from behind the Deadly Predators book? Read on for something awesome involving that one. 😉 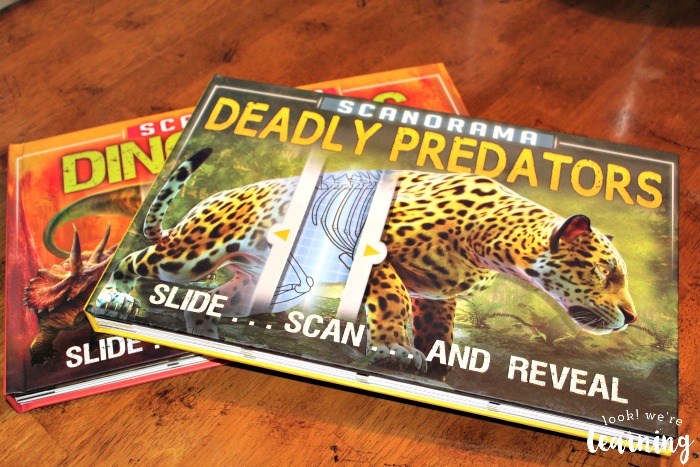 There are three different titles in the Scanorama series available from Silver Dolphin Books:

We got a look at the first two. Take a look at the Scanorama series in action below. (This page is from the Deadly Predators book.) 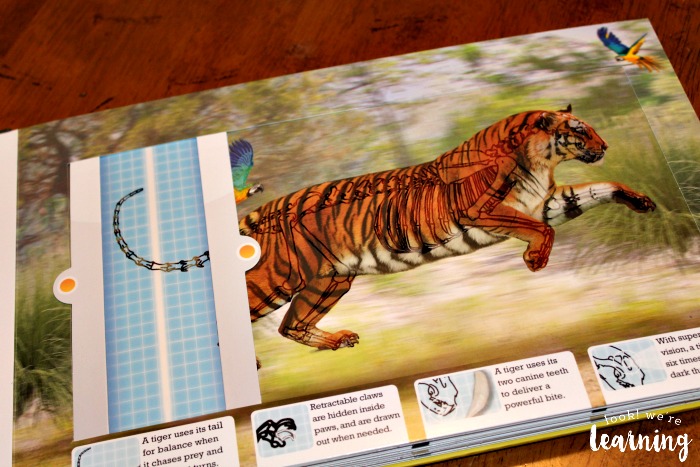 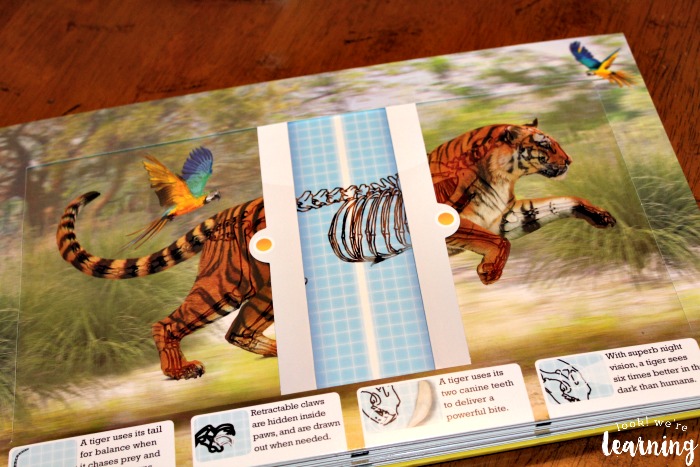 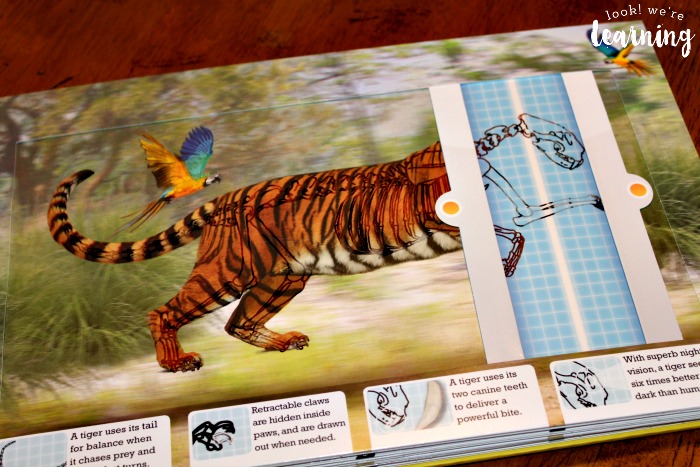 See how kids can “scan” over the image and investigate how the animal’s skeleton contributes to its prowess? That’s just super, duper neat. 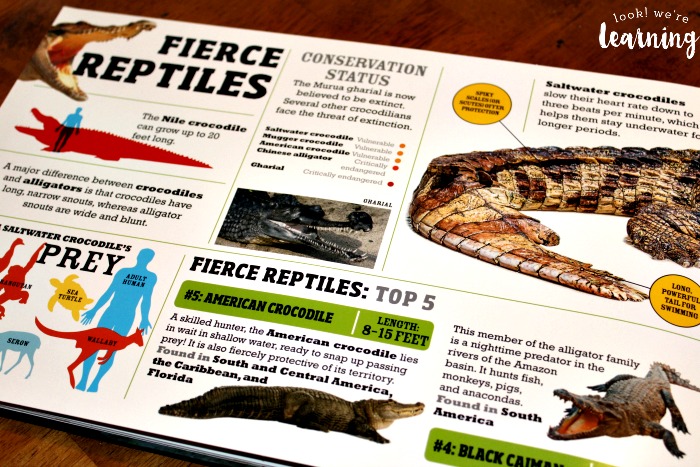 Plus, there is a LOT of information in each book about the kinds of animals covered. The Deadly Predators book contains sections about several types of predators, including scorpions, reptiles, big cats, sea mammals, and more.

Oh, and fair warning: There is a section about spiders, which contains vivid, full-color pictures of spiders. (Just so you don’t do like I did and drop the book in sheer terror when you come to that part.)

When I handed the Scanorama series book Deadly Predators over to my boys, they had a short conference about which section of the book they wanted to cover first. 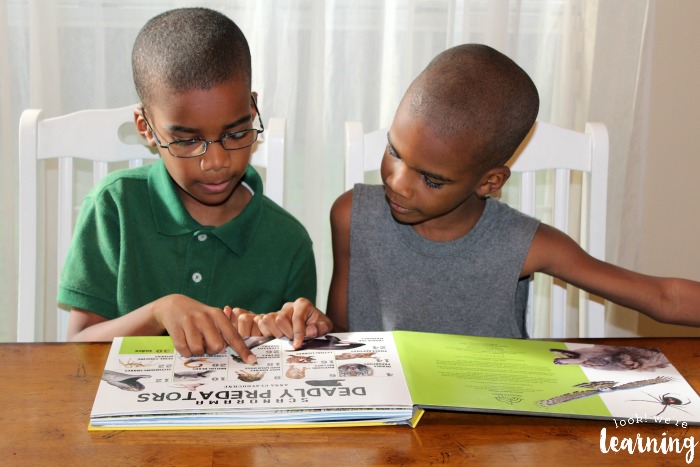 And, as I expected, they reached a unanimous decision: Big Cats. So big cats it is! 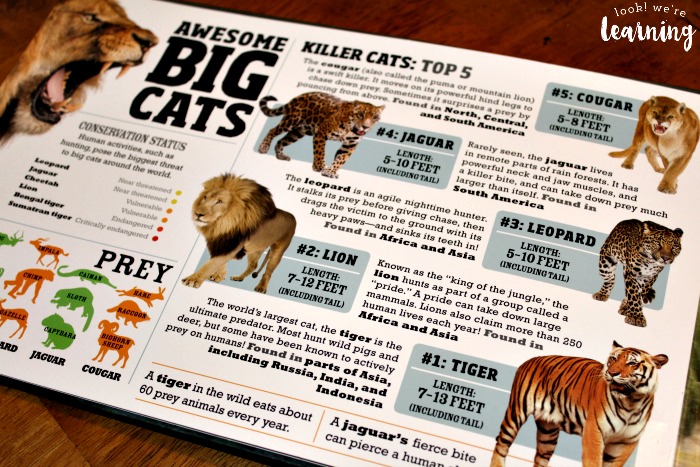 In the section, they got to examine five different big cats. And, since they’re already huge fans of wildlife, they knew some of the information. But, they were impressed at how long each animal was. I don’t think they had realized just how long a tiger can be before! 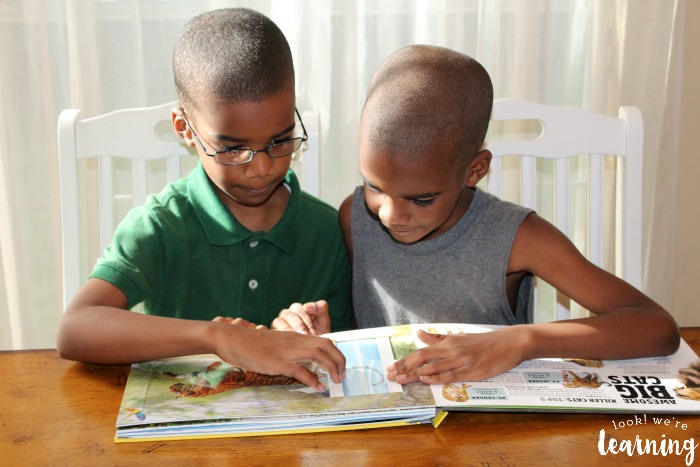 When they discovered the “scan” picture of the tiger, they truly came to life! 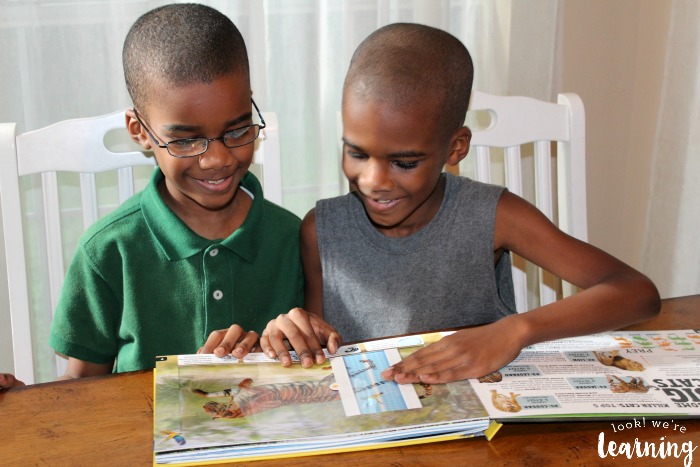 I had to keep telling them, “No. Wait. Let your brother have a turn.” and “You just did it. Let him try!” and “Okay, okay, everyone will get a chance.” I literally had two boys fighting over a book. That is an actual first in our household. 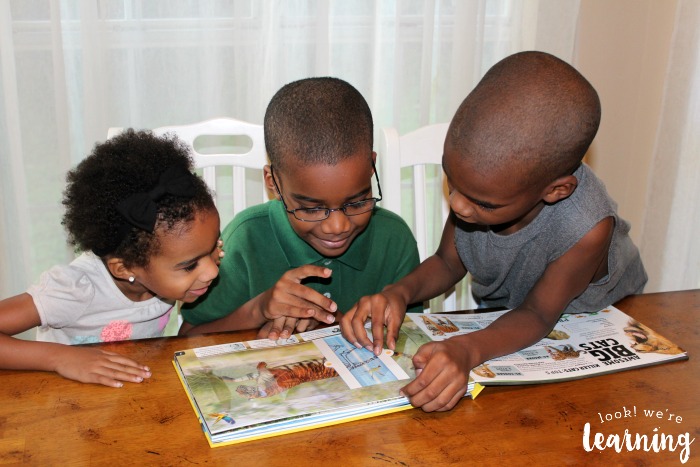 Even our preschooler wanted to get in on the fun! 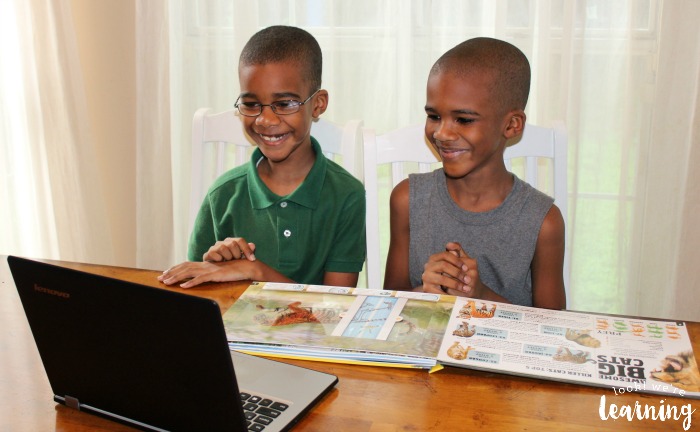 Then we watched a short video about big cats. The boys really enjoyed it, as you can see.

Actually, they were laughing at the way the lady in the video says “jaguar”, but they were still learning something, I swear! 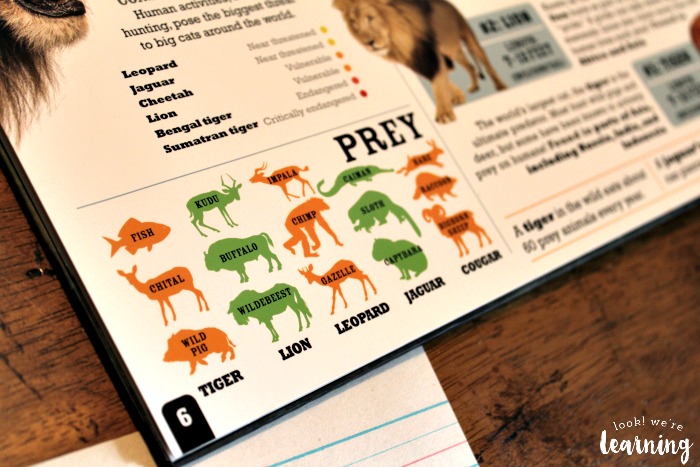 Finally, we took a look at the different kinds of prey each big cat eats. 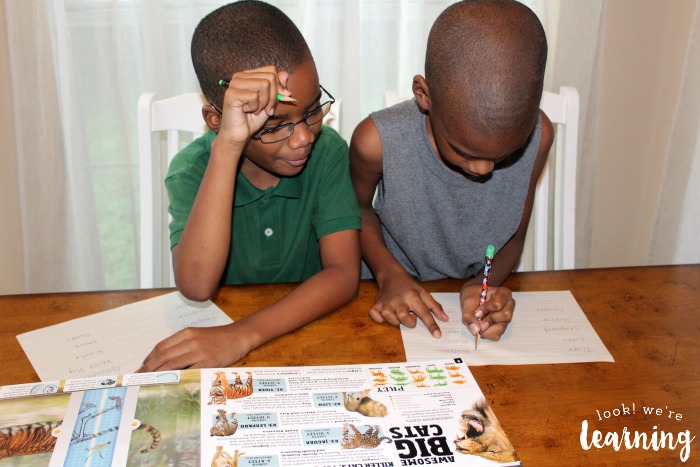 And the boys did a quick matching activity using the diagram in the Deadly Predators book. 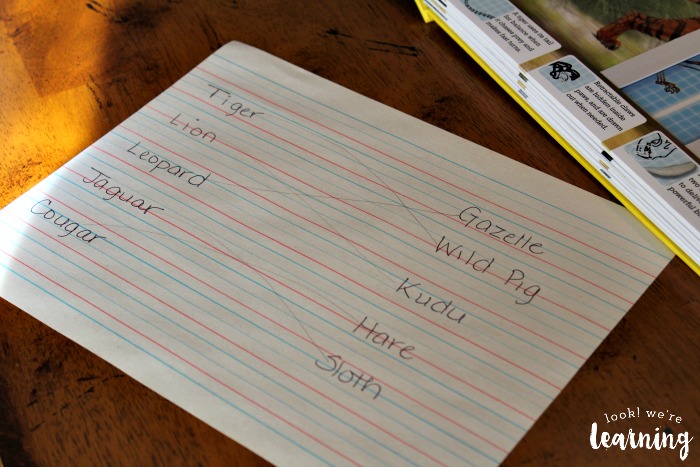 Finito! And we had all that fun just from one section of one book in the Scanorama series! Be sure to stop by and browse all three book titles and pick up one your kids will get excited about too! 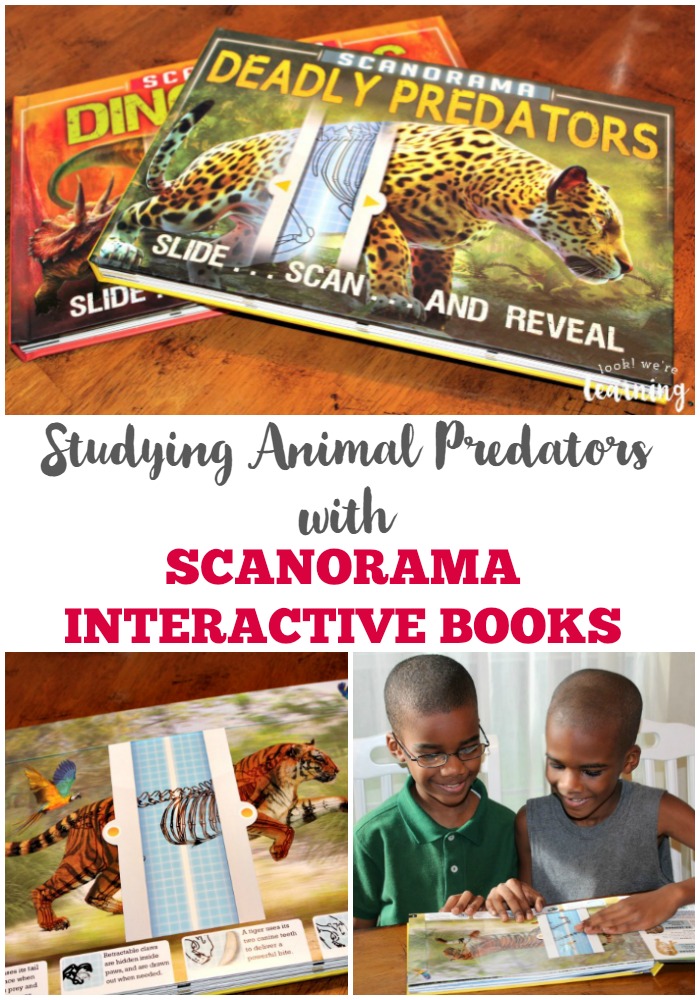 Want one of these books for your family? Enter to win the Scanorama book of your choice from Silver Dolphin! TEN WINNERS will receive one of the three Scanorama books: Deadly Predators, Dinosaurs, or Amazing Animals! To enter, just use the Giveaway Tools widget below! (Books will be shipped to US or Canadian addresses only.)

To learn more about the awesome books available from Silver Dolphin, follow the company on social media:

Now – for ANOTHER giveaway! 😉 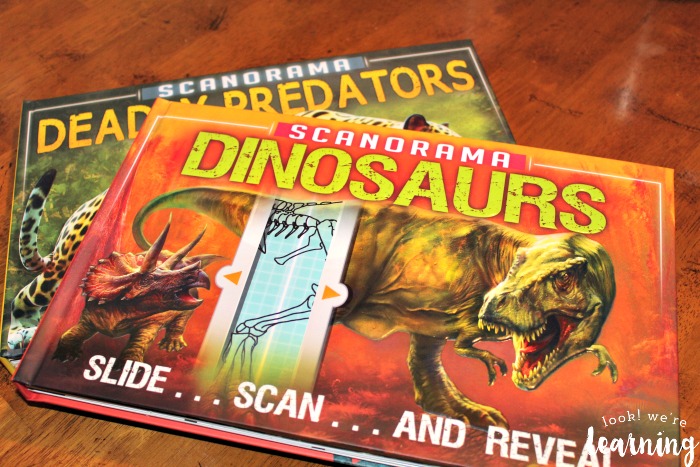 Remember that Scanorama book about dinosaurs I mentioned earlier? 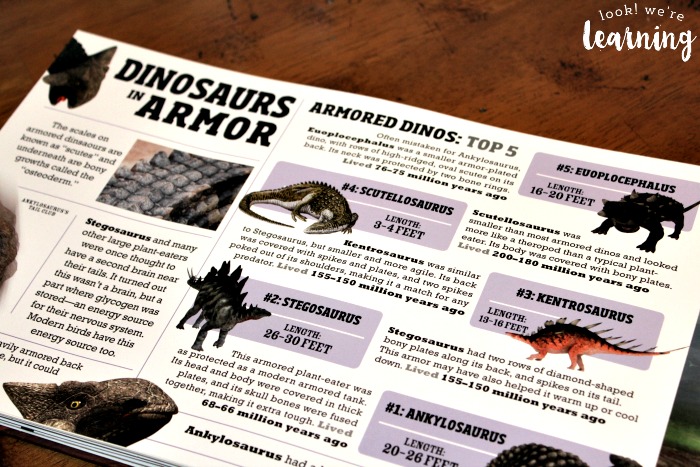 It’s just as awesome as the one about predators! 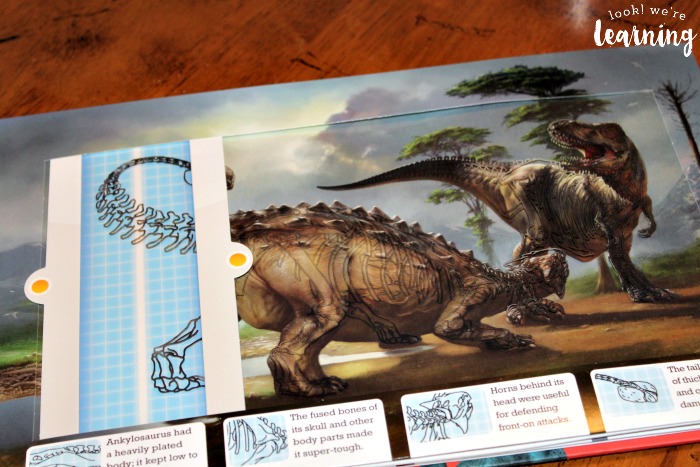 Right down to the scan-and-see-inside-the-creatures feature! 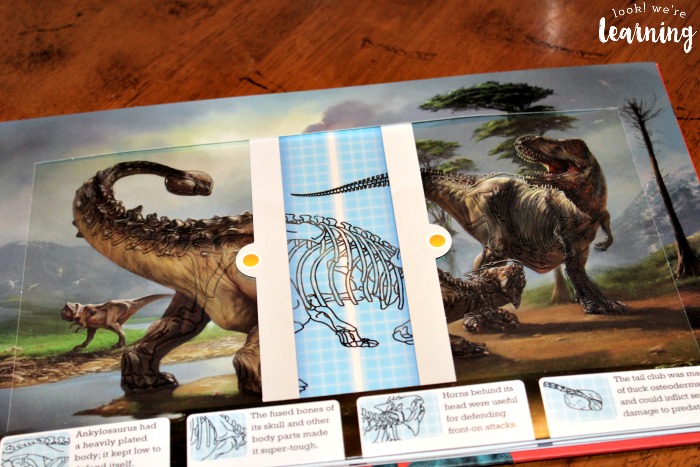 If you have kids that are dino-crazy, they’re sure to love this book! 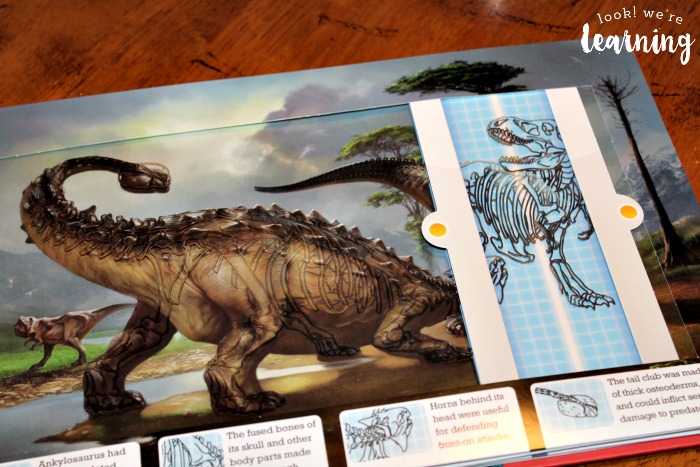 So I’m giving it away to one of my readers! To enter the giveaway, stop by the Look! We’re Learning! Facebook page at 8:12 p.m. EST tonight! It’s the easiest contest in the world to enter, I promise. 🙂 Full rules will be posted and the giveaway will be open for a week, so you have plenty of time to enter and win!