So, I was thrilled to get a chance to try Redbird Mathematics from GiftedandTalented.com! Since the program was developed by Stanford University, I knew it would be exceptional for teaching kids how to use mathematical principles to think their way through operations, rather than just memorizing them. And I wasn’t disappointed.

Read on to see how we used Redbird Mathematics to improve math thinking skills with our second-grader. Plus, enter to win a three-month subscription absolutely FREE! 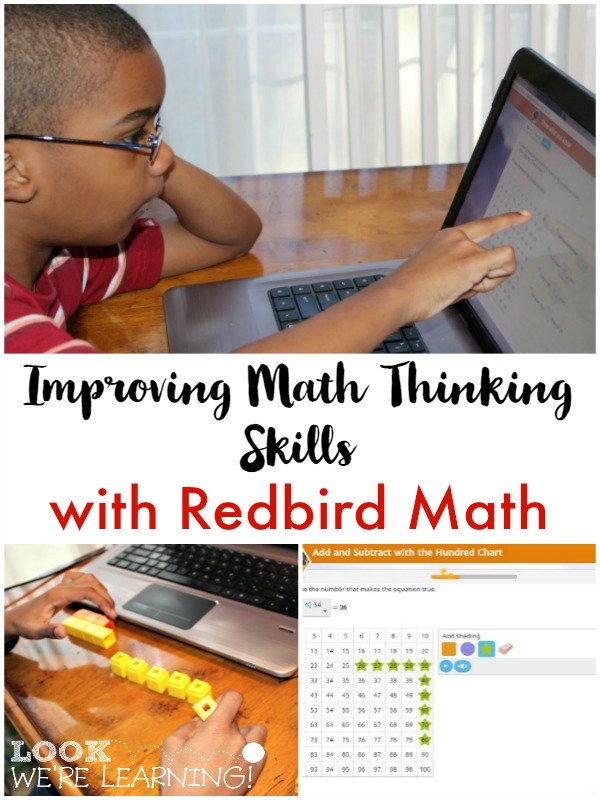 What If My Child Hasn’t Been Labeled as Gifted?

Don’t worry! You can still use Redbird Mathematics by GiftedandTalented.com. One of the things I love about this program’s philosophy is that “giftedness” should be the destination, not the starting point. Which means that your child doesn’t have to be termed “gifted” in order to use it.

Instead of being a program catered to gifted kids, Redbird Mathematics strives to help kids of all learning abilities develop their own mathematical gifts. And, since we’re trying to combat the “bad at math” stigma in our family, that’s a philosophy we can get behind!

When you purchase a subscription to Redbird Mathematics, you’re not tied to a single grade level. The program covers math concepts from kindergarten through grade 7, so you can move up or down as your child needs. 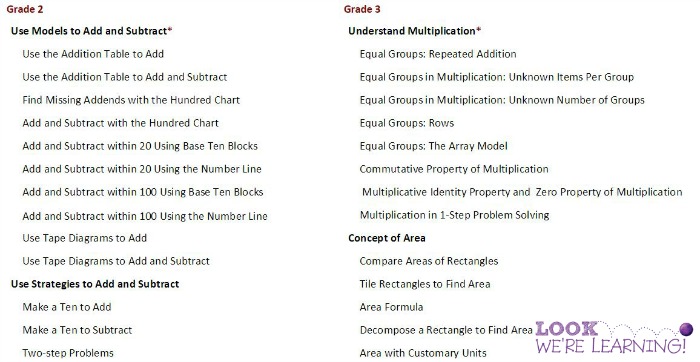 If you’re unsure which grade level your child should use, Redbird Mathematics gives you the option to look at the concepts covered in each grade. Since Pooh was already familiar with the Grade 1 concepts, we decided to start with Grade 2.

Here’s where it gets interesting. Once you choose a grade level for your child, the program gives him or her an assessment test to see what concepts they already know. 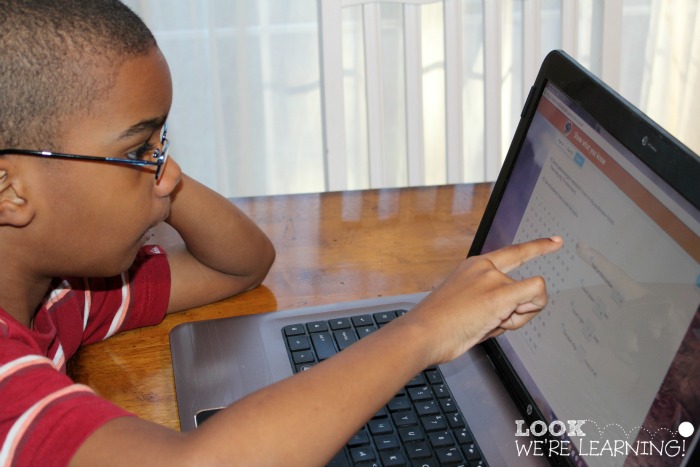 I’ll be honest: It was extremely tough for me NOT to help Pooh with the problems on the assessment. I had to keep telling myself “It’s just to see what he knows. He doesn’t have to get them right.” Eventually I just walked away. So this part might be hard if you tend to be a helicopter parent like *ahem* me. 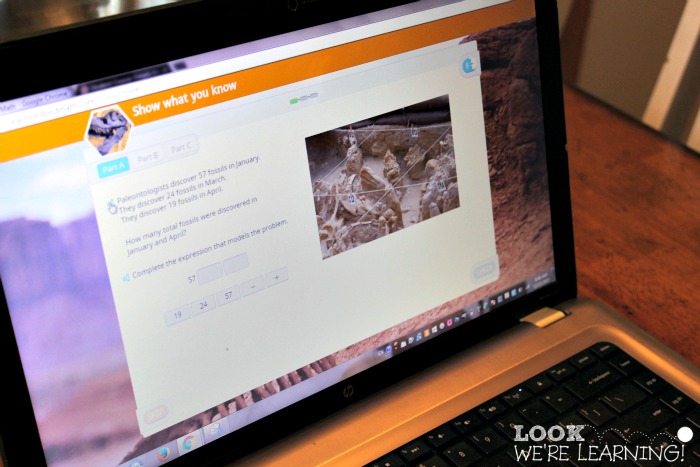 Once the assessment is complete, the program automatically chooses a starting point for your child. Then it’s time to get started!

What separates Redbird Mathematics from other math programs (to me) is the way that the program encourages kids to think about math operations. 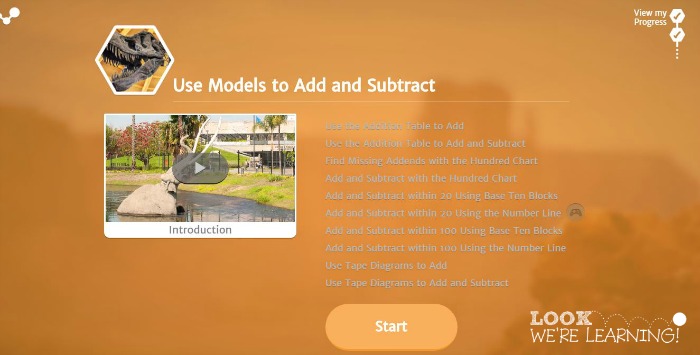 Pooh already knows his addition and subtraction facts through 12, but he had never used a hundred chart or base 10 blocks before. So it was almost as if he had to relearn adding and subtracting. 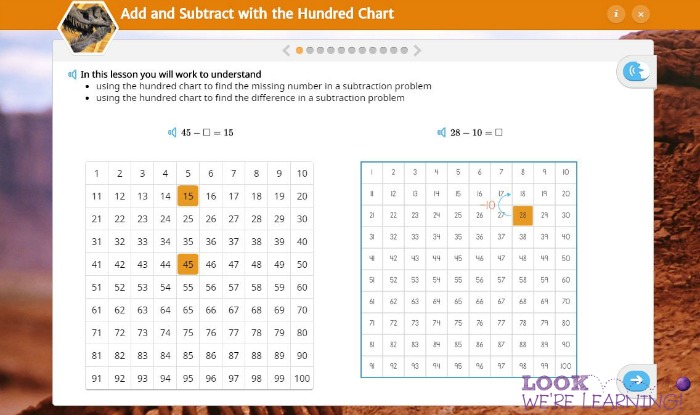 Frankly, it was as if I had to relearn them too. So, if you are used to teaching math in the traditional manner, expect a fairly steep learning curve when you first begin using the program.

I also found that it was not a program Pooh could use on his own. But that’s okay. I don’t expect a lot of independent math learning in second grade anyway. 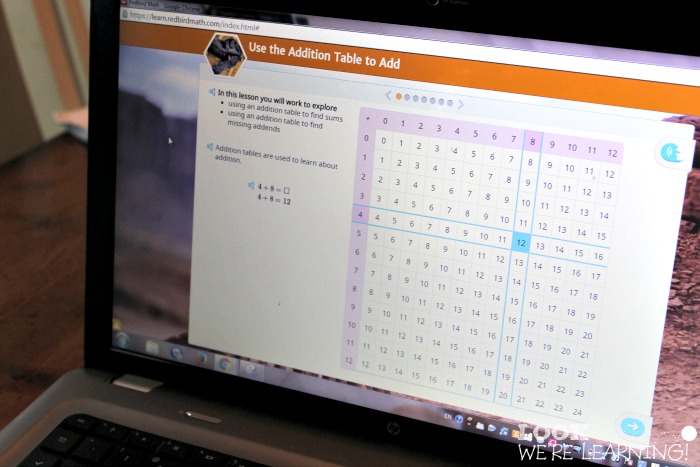 In the beginning of each lesson, Redbird Mathematics gives you an overview of what your child will cover, as well as a few sample problems. That’s really helpful, because it can help your child prepare for what to expect as the lesson moves along. 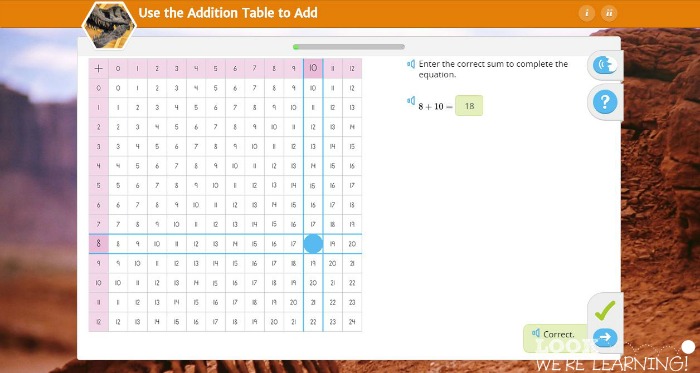 Here’s what I really loved: Pooh had to really use his brain to learn how to add with the hundred chart. For example, when he saw the problem “8 + 10”, his first instinct was to start adding it in his head.

Instead, I asked him to follow the program directions and learn how to find the same answer using the hundred chart. After a few minutes of practice, he got the hang of it. 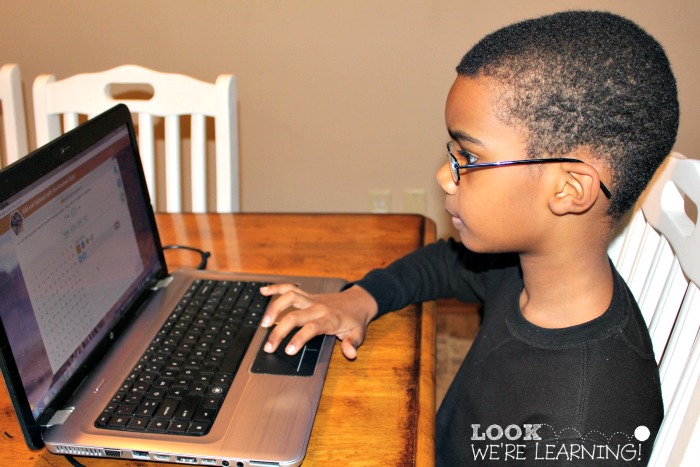 But if he already knows addition facts, what’s the point of learning to use a hundred chart?

Well – if he can understand how numbers are related to one another, then his ability to solve math problems becomes more flexible. 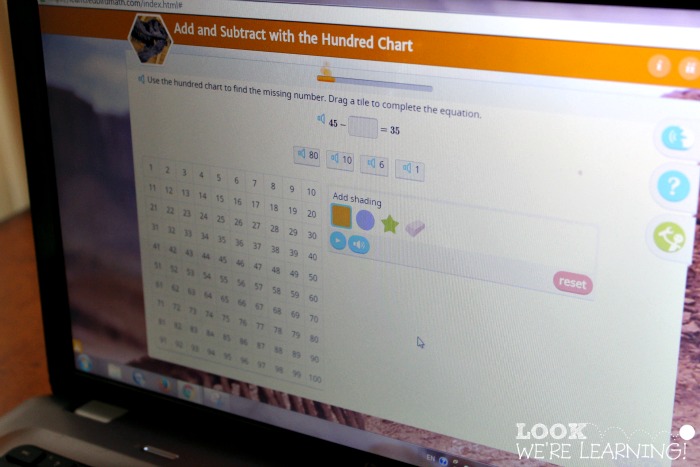 As the program showed him, moving up and down by rows increases or decreases numbers by 10. 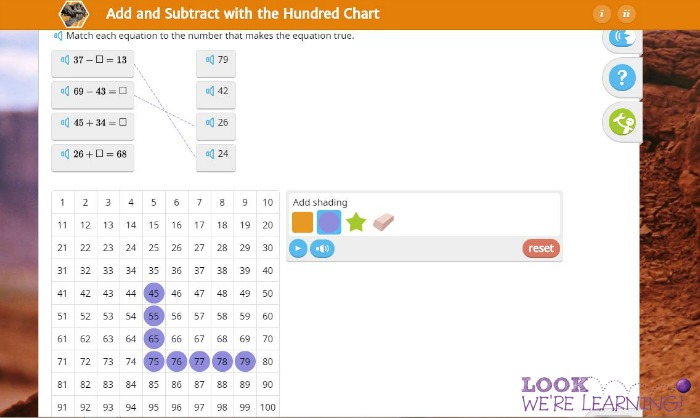 And moving left and right increases or decreases numbers by one. 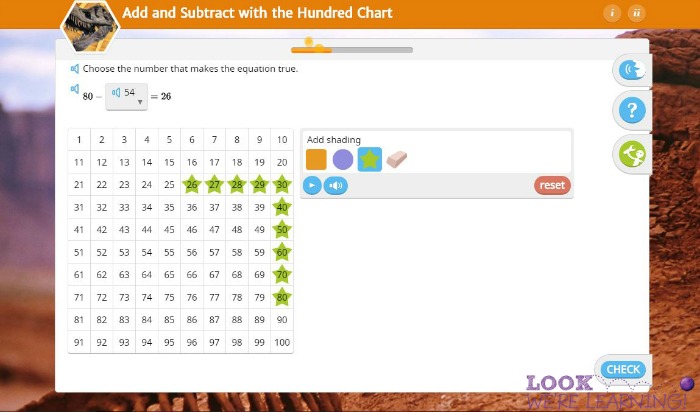 Once he grasped that, he could find missing numbers in equations and alternate counting by ones and tens quickly. That’s good practice for counting change, telling time, and algebra! 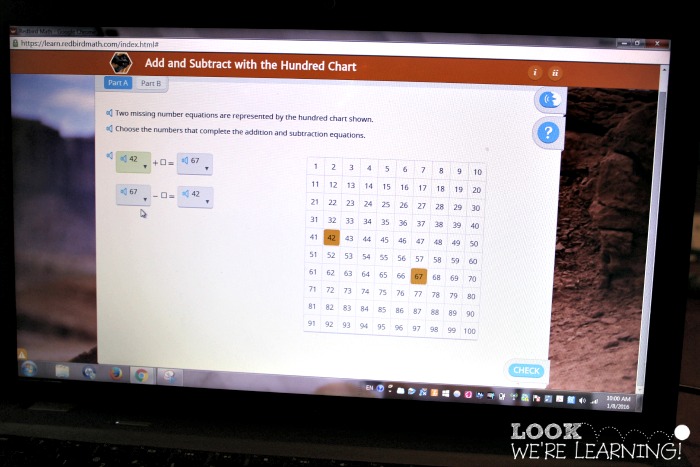 There were a few times that I supplemented Redbird Mathematics with some hands-on tools. For example, when we were learning about how to find the distance between 42 and 67 on the hundred chart and then place the resulting numbers in addition and subtraction equations, it was time to break out the chalkboard. 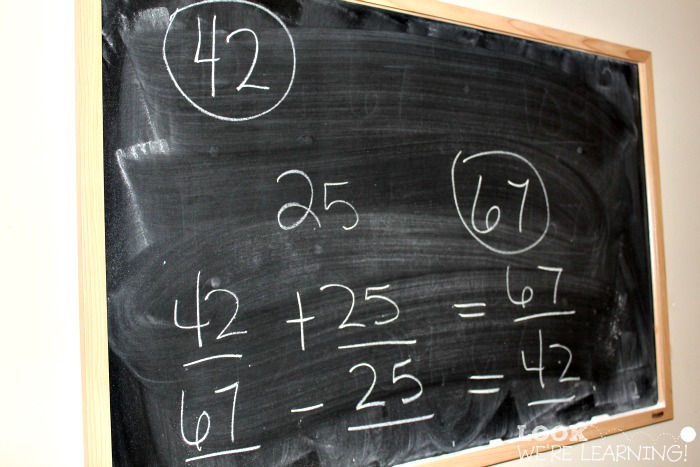 Once Pooh saw that we were using the numbers on the chart to fill in an abbreviated fact family, he understood what to do with them. 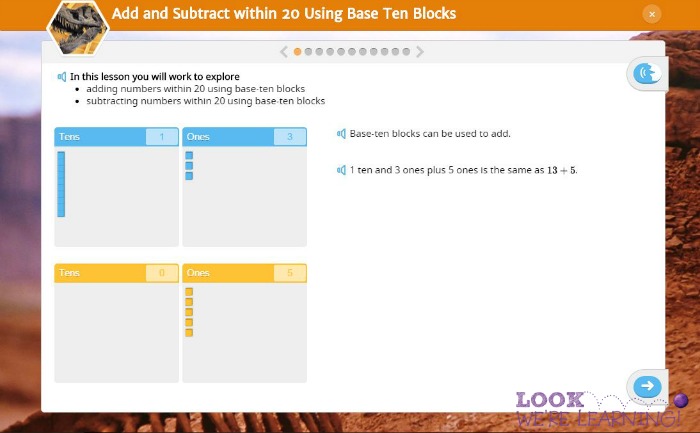 But here’s what’s good about that: If kids can learn how to perform the same operations with differing data, numbers, and methods, they begin to understand mathematical principles better. Which means they can use them in various situations with ease.

And that’s what we want, right? 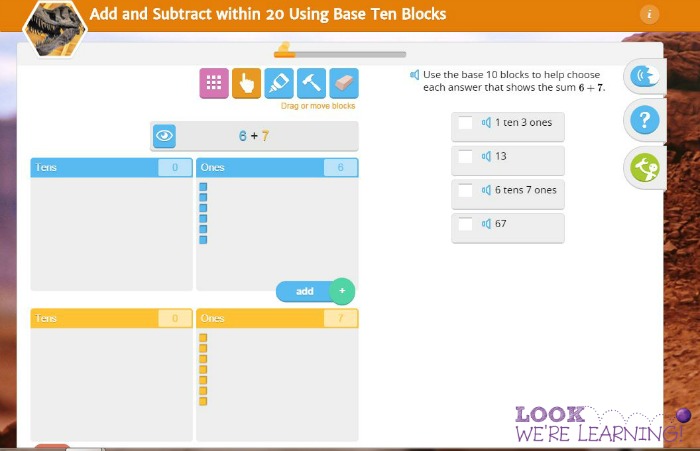 With the Base Ten blocks strategy, I also used a hands-on tool: Unifix cubes. 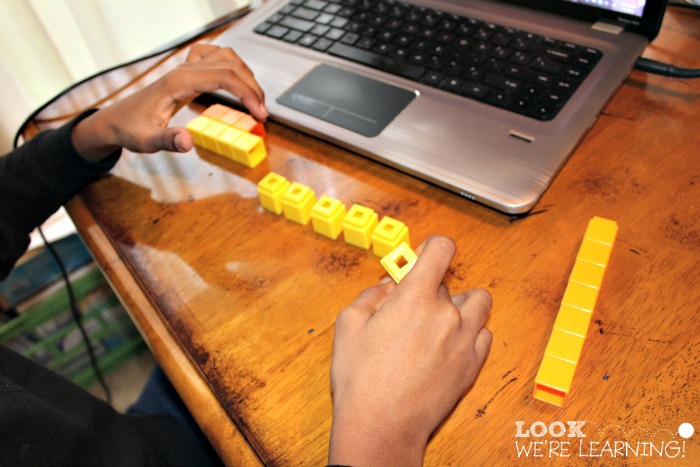 Breaking the rows apart into single cubes to replicate the math problem on the screen really helped Pooh “get” what we were learning. 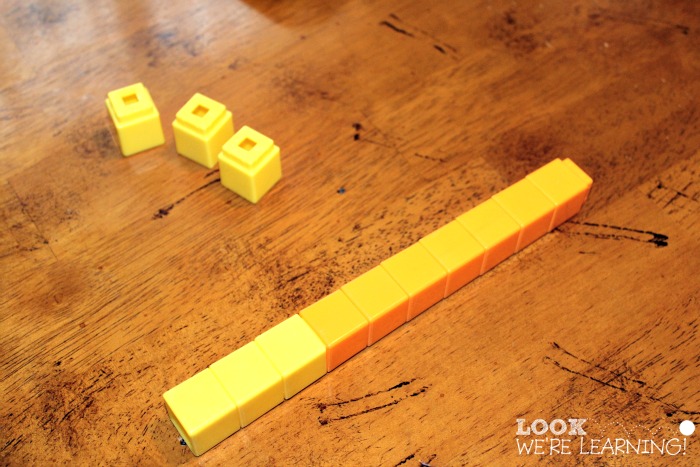 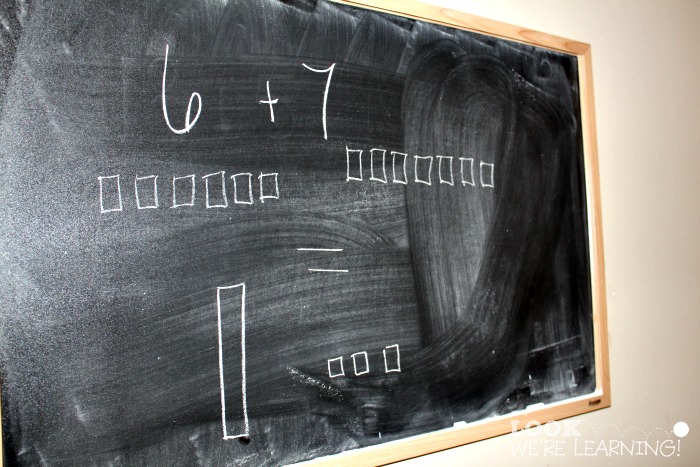 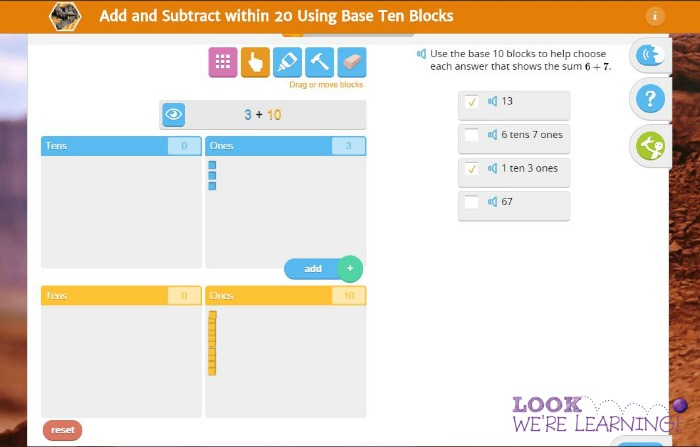 And that is the beauty of learning to add in different ways!

If you’d like to boost your child’s math thinking skills, now’s the time to purchase Redbird Mathematics! You can score a 10 percent discount on a three-month subscription through February 1 with the promo code LEARNMATH! Just be sure to enter the code during the checkout process.

Now – on to the giveaway!

To enter, use the giveaway widget below!